Supplier Directory
Learning Solutions
Login
You are at:Home»Industry Focus»How do you take your risk? – EIS?

I have recently been involved with some Enterprise Investment Scheme (EIS) funds, which is a departure from my usual duties with IFA firms. That is one of the joys of working freelance. But it has given me the opportunity to get under the bonnet of EIS funds and  to re-assess the attitudes of IFAs towards EIS funds.

Traditionally. IFAs have considered EIS funds as funds that involve the tax-efficiency tail wagging the investment dog. EIS funds have been considered to be too high risk for nearly all clients and even with the attraction of the tax relief on offer, the risk of loss was still too high to consider seriously for their clients.

So, what has changed? Actually, not a lot – yet. But with the lowering of pension annual allowances and lifetime allowance limits, more clients are reaching the point where they have to consider other tax efficient investments in order to take any tax advantages available. The attraction of EIS has been increased following the Budget with the doubling of the allowances for knowledge intensive based EIS qualifying companies.

The Enterprise Investment Scheme (EIS) is a UK government tax-relief scheme launched in 1994, as the successor to the Business Expansion Scheme, to encourage private investment into early-stage unquoted companies. Since launch the scheme has promoted over £10bn of private investment and its success has been credited with the governments more recent introduction of the Seed Enterprise Investment Scheme (SEIS), which specifically targets companies in their first two years looking to raise that first £150,000 in funding.

With any EIS investment you can take advantage of the following reliefs on up to £1m of investment made into eligible companies per year:

EIS funds represent an excellent opportunity for EIS fund managers to renew their acquaintance with the IFA community.

There are five current EIS tax reliefs available to investors in companies qualifying under the EIS, which are summarised below:

Surely, if the investment is starting 30% up, it should be able to produce great returns. And indeed, it would need to lose more than 30% for the investor to start losing. However, we need to consider the nature of the underlying companies receiving the investment.

EIS funding is typically used by new companies starting up. More than half of new businesses do not survive beyond five years, with the UK tax system, a lack of bank lending and the cost of running a business cited as the top reasons for failure.

Once their businesses are up and running, owners are also struggling to plan for the long term. Some 61% of the 160 business owners surveyed (Telegraph 2014) said they lack confidence in their ability to achieve three years’ consecutive growth.

I understand that some EIS fund managers are offering a support system for the companies receiving their money. This could be fund managers being represented on the company boards or even mentoring, marketing and other support functions to increase the likelihood of success of the fledgling companies. This is a positive development for EIS funds.

Strangely, although EIS has been in existence since 1994, there does not seem to any history of past performance for IFAs to be able to be confident to advise their clients to invest. By the nature of the early stage companies, EIS funds tend to be quite short-term.

Also, unlike Venture Capital Trusts (VCTs), there does not appear to be any dominant fund managers, like Octopus Investments for VCTs in the field of EIS. This lack of a dominant fund manager is unhelpful to IFAs, who may be less familiar with the EIS offerings. If there were a fund manager with acknowledged consistent success, then IFAs would be more comfortable.

On the basis that EIS funds represent a high level of investment risk, due to the nature of early stage investment in start-up firms and the risk of failure, how do advisers assess whether their clients are able to accept the risks involved?

I have seen attitude to risk questionnaires completed that show the clients’ tolerance to be suitably high to invest in EIS. I guess that this could be a way of assessing their attitude for this particular tranche of money to into EIS. But what a painful waste of time for the clients. Filling in ATR questionnaire is painful as the questions are so generic, but complicated and unfocused towards the clients.

The main priority is to record that the clients understand the risks involved and can afford total loss on this part of their wealth. Since EIS should only be considered as part of a much larger and wider investment portfolio, this should be the cherry on top of the cake to spice up the portfolio rather than a major ingredient. Therefore, rather than a bland questionnaire, a nice file note outlining a genuine explanation and discussion would be far more in keeping with Treating Customers Fairly.

The time may be right

With the reducing levels of pension allowances, then clients will be looking at alternative tax-efficiencies. The increased allowances for knowledge intensive EIS funds represent an excellent opportunity for EIS fund managers to renew their acquaintance with the IFA community.

If the EIS fund managers can tell a good story of support to maximise the chance of success of the early-stage companies, then the risk may be considered to be lowered to levels that would be acceptable for the retail clients of IFA firms.

TC Compliance Services Tony Catt is a freelance compliance consultant working with several firms of different sizes. "I have previously been an adviser, which gives me a good understanding of the advice process and dealing with customers and I enjoy a close relationship with my adviser clients" 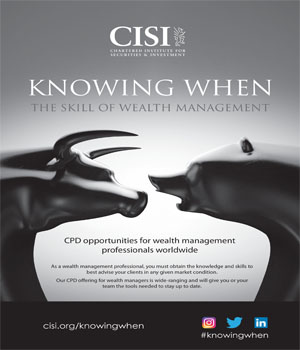