Supplier Directory
Learning Solutions
Login
You are at:Home»Regulatory General»Aspects of the extending increased accountability regulations across the industry

Just because…
as an industry do we never learn? We did exactly the same with the Retail Distribution Review, RDR … thought the government would overturn the requirements, so didn’t do anything about it until the last minute. I know I am being general and apologies to those of you that took your exams with plenty of time to spare and changed your business models to adapt to the requirements. However, working with Firms who will be affected by the Senior Managers and Certification regime in 2018, we are seeing exactly the same thing happening. Brexit will not affect the implementation of SMCR, GDPR or MiFID II – the government has already stated this. Just because the Consultation paper has been pushed back to Q2 doesn’t mean that the implementation date has been pushed back. On the 7th March, a year after implementing the individual accountability framework in Banking, The FCA published an article – ˜Senior Managers and Certification Regime: one year on, which confirmed that they “expect implementation to begin from 2018”

Time is not on your side
It took the Banks, Building Societies, Credit Unions and Designated Investment firms a good 18-24 months of work to prepare for the implementation and now they are saying to us “we never anticipated how much effort this would take after implementation, in just managing BAU”

We are already a quarter of the way through 2017 and the regulators will be expecting that the firms impacted by what they are now referring to as Accountability 2, will have learnt the lessons from Accountability 1. Therefore they will assume those firms won’t need as much time.

You know the size of your firm but perhaps you don’t realise the resource you will be required to devote to the Accountability 2 project. So let’s just have a look at a few of the areas you will need to address if you are one of those firms that are affected.

Board Buy-in
In a number of cases HR, T&C and L&D were the areas most involved with the work streams for the initial tranche of SMCR and often led the overall project implementation. Time and time again we heard that getting stakeholder buy-in … attendance at key meetings, proved difficult. The key individuals, often members of the board, were not taking it seriously even though they were the main ones being affected by the regime. Let’s talk reality here, if what you are doing isn’t seen as affecting the bottom line in a positive way does it grab the senior managers’ attention? The answer as we all know is a big fat no – let’s not forget they are running a commercial business.

Getting Board buy-in from the start and senior manager sponsorship is a must if firms are going to manage the implementation in the time they have available. This isn’t going to be easy when Consumer Credit firms have just gone through attaining full permission status (some are still going through that process) and Wealth Management firms and IFA’s have MiFID II to contend with and all those affected by Accountability 2 will also have GDPR.

As the financial advisers, investment managers, dealers and mortgage advisers are classed as significant harm functions and a number of the firms in this second tranche of the SMCR employ a significant numbers of these individuals or look after them via their network, the Certification Regime will play a significant part probably more than in Accountability 1 – get the gist –  it’s significant.

Once senior managers understand they will be personally responsible and accountable for the prescribed responsibilities they are allocated, the mental wrestling will begin

CF30’s will no longer need to be registered with the FCA, but this doesn’t mean the requirements for fit and proper and competence can be lowered. It means in practice they will need to be far more robust than we encounter in some of the firms we deal with and if I was a senior manager with the oversight responsibility for the Certification Regime I would want them to be extremely robust.

Job Descriptions
Do you have an up to date Job description for all the roles that will be affected by Accountability 2? Jobs change and evolve, so even if you do have job descriptions (many firms don’t) they could well be out of date and not representational of the job that is actually being undertaken. Remember your competency standards should reflect the job description. The roles of individuals that give investment advice and those that deal with mortgages has changed over the last few years – make sure your Job descriptions have changed with them.

Employment Contracts etc.
Your employment contracts and how you deal with discipline and capability will need to be reviewed because if individuals are not competent they cannot do their role. If you exit someone from your business regulatory referencing requires you to disclose the fact that you did not deem them fit and proper to undertake their role.

When senior managers sign the new form A’s or the grandfathering documentation they are signing to say they understand the conduct rules – “The candidate confirms that he or she understands the regulatory responsibilities of my proposed role as set out in the rules of conduct in the FCA’s COCON and/or PRA Conduct Rules”. Many senior managers in Accountability 1 signed this without having the bespoke training aligned to their role and responsibilities. If you don’t train your senior managers before they sign the relevant documentation that will be submitted to the FCA, they will be in breach of at least two individual conduct rules – acting with integrity and acting with due care, skill and diligence!

Buck the trend
I could go on and on about the things you can start doing now, but I only have a limited amount of space so I will leave you with a final recommendation  –  buck the trend. There is enough information available for you to identify, now, the capacity you have from a Resource and Technology capability to deal with what this means to your business. Then identify the capacity you will need to ensure the impact of this extending regime meets the regulators requirements. Starting simple project planning to address that gap will put you in-line with some and ahead of many affected by Accountability 2. 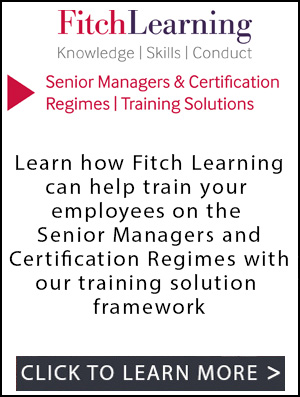