If you were asked a question about what your T&C scheme says about your organisational culture it would be understandable that your initial response would be ‘at least we have one!’. Remember under TC2.1.14, a Firm can choose whether they ‘establish, implement and maintain a training and competence scheme’ so opting to create a formal structure is a good first step in demonstrating an organisation’s commitment to creating a culture that – aims to ensure that it only employs ‘personnel with the skills, knowledge and expertise necessary to discharge of the responsibilities allocated to them’. But it is just that – a first step.

Training and competence, and an organisational culture are intrinsically linked. Part of what a good training and competence regime delivers is the activities that enables a company to monitor its organisational culture, as well as to train and supervise its’ colleagues and leaders to understand what is required of them in their role. I like to explain it as the Scheme lays the tracks that the organisational culture train runs along. You see a good T&C Scheme sets out an individual’s route to competence. It should set out how a new employees’ training needs are assessed at the outset and at regular intervals (including if their role changes) as well as defining the support that will be provided to ensure that any relevant training needs are satisfied. To me, this is the point at which an individual gets on the organisation train, more commonly known as the point of recruitment.

In the same way as when we travel by train, not everyone gets on and off at the same point, the journey will be different for every person joining. Some will be travelling to the same destination, but the time taken to reach that destination and the route taken may differ. A good Scheme should describe the different journeys, the stations that the train stops at, the ones where you need to change, who will look after you along the way and how to deal with delays, breaks in journeys and what happens when you disembark. But just like the different train operators, different Schemes do this to different levels of efficiency and how they do this also tells us much about the organisation’s culture.

In the same way as when we travel by train, not everyone gets on and off at the same point, the journey will be different for every person joining.

Take recruitment for example. It’s great if your Scheme asks you to assess a new recruit’s knowledge through generic tests and skills via role play scenarios at interview but what does it ask you to do with the information you gathered? If it doesn’t have a prescribed means of how to use the information gathered to help shape the new recruit’s induction period where the gaps can be evidenced as being addressed, then this can indicate that as an organisation, whilst you do collect the required information, you fail to do anything with it. Furthermore, if your T&C Governance Group or Committee cannot evidence their sight and review of this data, it could be seen that as an organisation, you are more concerned with getting ‘bums on seats’ rather than recruiting the right person for the right role. If that same practice is replicated in other business processes, then what other information could your organisation be failing to identify, discuss and take appropriate action on?

It is also widely acknowledged that an organisation’s induction programme should set the tone of what’s to come, which is why they typically include sessions on the company’s history, aims, values AND culture. But as we know, culture isn’t just a set of words on a wall.   An organisation’s culture defines what is encouraged, discouraged, accepted or rejected.   So, if the focus of your induction programme is about getting someone through as quickly as possible and just covering the bare necessities, what do you think that says about your organisation? Furthermore, if it is a ‘one size fits all’ with little scope to deviate to address any of the inductee’s knowledge or skills gaps that may have been identified at recruitment, is that sending the right message about you wanting to ensure your staff have ‘the skills, knowledge and expertise needed to discharge the responsibilities’ of their individual role? In a similar vein, the information you use to define someone as competent also speaks volumes.

Far too frequently, I still see organisations that are stuck in the tick box era of a prescribed number of activities needing to be demonstrated to achieve competence rather than a minimum number, or where the supervisor has little autonomy (albeit within given parameters) to make decisions for those they are taking responsibility for. At best, this simply suggests that you have failed to update your T&C Scheme with the changing regimes. More ominously, it could suggest that your supervisor’s training is deficient. Is the reason you are not allowing supervisors to make their own decisions based on what they see when they are observing is because your Supervisor Induction Programme fails to give them the opportunity to learn and demonstrate that they have the ‘necessary coaching and assessment skills as well as technical knowledge and experience to act as a competence supervisor and assessor’?

Even with so many different initiatives launched over the years by various Regulators, many organisations still have been fined for poor practice. I think this is not always because they have done something intentionally wrong but more often because they have failed to ‘join the dots’. Far too often we still look at things in isolation, like when the Regulator was rule-driven rather than being Principle-based, and do not see the bigger picture. For example, we also know that under the Senior Management & Certification Regime individuals will be held accountable for the standard of training that their organisation delivers both initially and on an ongoing basis. We also know that Firms need to ensure that their business processes and people drive the culture they wish to embed. But how many organisations have made the link between their training and competence regime, their culture and their SM&CR responsibilities? With that in mind, you may want to take a good hard look at your current T&C Scheme or regime and see what it reveals about your organisation.

As an experienced and professional Consultant and Training Professional, I have had the privilege of working across a wide range of companies and business areas predominately in the Financial Services sector. Wherever I am and whatever job role I am undertaking on behalf of a client, you will always find me influencing and driving others to produce results. 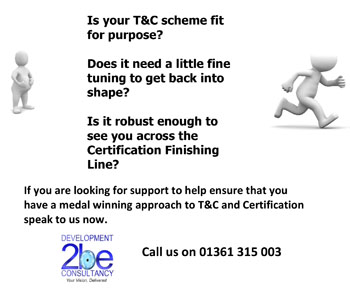