Supplier Directory
Learning Solutions
Login
You are at:Home»People Development»The art and science of one to ones

The science of one to ones
Below is the flowchart with all the tools that you need to run a performance based one to one with your sales people. One to ones normally occur monthly in most inside sales led businesses but they can be run more often if desired and the situation requires. Remember the aim of the one to one is to move the consultant forward in some way, to create some agreed actions that increase or maintain performance levels. It’s not a form filling exercise although if I had a pound for every form filling one to one I’ve seen… 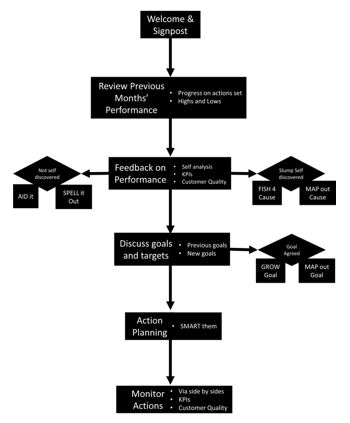 The tools for a one to one 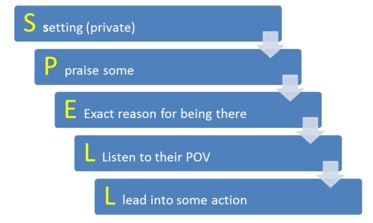 The Art of One to Ones
This is the negotiable part of the one to one. The area where skills and techniques come in, where your personality abounds and your experience and tactics help you to arrive at some generative action with your salesperson.

Let’s see how this reveals itself.

Welcome and Signpost
Usual ice-breaking works here, but don’t drag on the analysis of the penalty in last nights’ match. In fact, if you’ve asked your salesperson to prepare the one to one, you can progress very smoothly, after all time is important and good one to ones last around 45 minutes. Ask them to think about their highs and lows for the previous period. Share your sales dashboard with them so they can judge their own KPIs and other quality scores. It’s a good idea to train them on how to interpret the data – the more ownership the better.Get down to business quickly; after all, this is coaching.

We never criticised, or fed back what they weren’t doing, just positives. And it worked.

Review Previous Performance
Open up to your salesperson immediately. Go for self-discovery and ownership straight off the bat. Ask them about their performance in the past month, the highs and lows. Ask them how they’ve been getting on with the agreed actions from the last one to one. Allow them to talk, don’t dominate proceedings.

Feedback on Performance
Let there be praise. Immersed in the hubbub of a busy sales organisation with a number of salespeople to manage, quotas to achieve and pressure from all sides…we forget that salespeople need praise. And lots of it too. On average children need 9 positives to outweigh any 1 negative. I know this from first-hand experience coaching young boys in Rugby from the age of 6 to 13. We used the technique of only building strengths, lucky for us Rugby Union has a position for any lad however small, short, fast, slow, lumbering they were. We never criticised, or fed back what they weren’t doing, just positives. And it worked.

As adults we need 5 positives to outweigh a negative. In some cultures this requires many more particularly in the far east where “saving face” is a vital component of civilisation. We’ve all heard of the sandwich feedback. Positive, then negative, then positive. Try this new burger instead if you want to use the sandwich method. Dollops of praise: 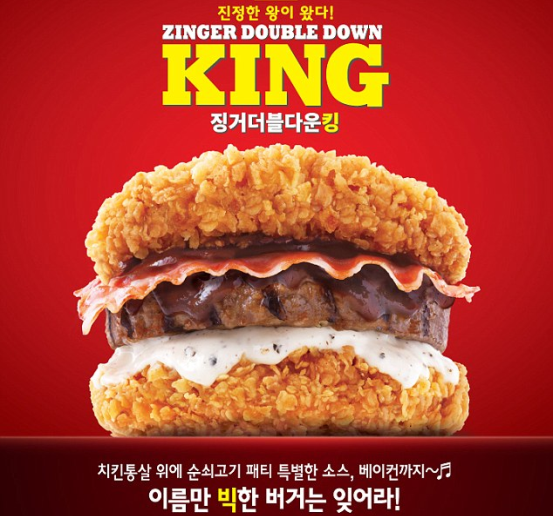 Self-discovered Feedback Rules OK!
The best feedback is self-discovered by your salesperson. We know this. Self-discovered feedback can be facilitated by helping them to understand the KPIs and the other measures on your sales dashboard. At least they can admit to a fall in performance or a slip or two. Should the salesperson’s performance be dipping, then we should do something about it, to create some actions that’ll take them back up to the desired performance. We’ll come onto that in a moment but first we need to crack the cause of the dip. Science comes in now. FISH is the tool to use here. Firstly we need to get the salesperson to F focus on the problem. If they’ve self-discovered it, then we can move onto I identify the cause of the slump.

If they haven’t realised it, then you need to provide feedback. Feedback is essential because they don’t know what they don’t know. Johari’s Window calls this the Blind Spot

Remember at least 5 pieces of praise then use the tool – AID.

AID works really well to provide punchy feedback to arrive at a goal or new objective, it won’t solve the performance slump, you need FISH for that. This is the science.

Being Direct
But what if the salesperson doesn’t run with the feedback or disagrees with it? Maybe you know you have a battle on your hands as they’re quite feisty and are prone to push back and defensiveness. This happens more that we like to admit.

Use SPELL. Or spell it out to them.

When they’re talking it’s a good idea to utilise the MAP listening technique, that way they can spill it all out.

Getting to the Root Cause
So there we have the problem agreed and focused on. Next we identify the cause of the slump, the root cause. Many coaches and sales managers will try to identify the symptoms of the slump and solve these. That’s not good enough. For example a salesperson might be slumping, her numbers are down, her motivation has suffered, so the sales manager tries to re-motivate her with some challenges and new targets. Believe me I’ve seen this. The symptom is being treated not the cause. We passed through Calais on our return from holiday in France on the last Saturday in August. I was fully expecting the port to be busy, some queuing involved but I was taken aback by the 5 hour queue outside the port. The tailbacks were caused by the migrants trying to board every lorry, truck and RV heading for the UK. The migrants, from Somalia, Sudan, Ethiopia just wanted simply to live in the UK, which they believe is a sanctuary and a place where they can have a better life. And they were doing all sorts of antics to get on the ferry, causing traffic carnage in Calais. The symptom was traffic and illegal boarding of the trucks heading for the UK, so the authorities erected 12 foot high fences around the port, drafted in hundreds of police armed with rubber bullets and riot gear and tried to refrain the migrants from boarding the ferries. However this wasn’t solving the root cause. The root cause was the reason they fled their home countries. War torn, torture, lack of food and shelter. Whatever the reason, that was why they fled their homes in the first place. So we need to drill down to the root cause for our salesperson’s slump. And then you can fix it and develop an action plan to solve it over the long-term.

Discuss Goals and Targets
Now we have some goals to achieve either arrived at as a result of FISHing, SPELLing or AIDing.

Once the salesperson has a goal or an objective they want to achieve, then it’s a straightforward matter of using GROW to arrive at an action plan or two. In the Will section of GROW when you’re discussing what their plan of action is going to be, we need to be disciplined to ensure that the actions decided are SMART. As old as the hills, but a veteran. Is the action specific enough, is it measurable – what gets measured gets done – is it achievable with their current capability, is it relevant to their role and will it work and finally, is there some sort of timescale attached to it otherwise it’ll just run on forever.

Monitor Actions
With the one to one over for another month, it’s very easy to get bogged down in the detail of a busy contact centre and forget what was agreed until next month. This is a mistake. The actions need to be monitored by you. Maybe a weekly catch up is needed. Carry out your “on the job” coaching and observations, keep an eye on the relevant KPI. If you SMARTened the plans in the first place you’ll have measures to watch out for. The science and art of the one to one. Follow the science, use your skills to apply the sequences and you’ll have generative action following every one to one. After all coaching isn’t coaching unless action evolves. If there’s no actions agreed, then you simply haven’t been coaching.

Paul Archer is an Online Sales Trainer, Speaker and Conference Host. He’d be happy to assist you in moving your workshops online during this challenging period. Email him on paul@paularcher.com or LinkIn with him at www.paularcher.uk The world of sales development has changed, many have missed this and boldly go on to run courses in the old-fashioned way. You want to develop your people – professional advisers, salespeople, coaches - and know there is a better way. He can help you. Think about music. I mean the music industry. In 2000 music became free, illegally at first with Napster, downloads became cheap as chips and streaming now cost $10 a month. In the same way, traditional self-development is now free. Everything is available online. Music artists and bands now make their money performing live. The live experience is what fans will pay money for. Recorded music is merely to create demand for the live experience. He brings his 35+ years of sales expertise and experience to you in two ways: Online, on-demand, just in time. He doesn’t run “just in case” training courses, they’re a thing of the past. Development should be “just in time”. Curated video, live videocasts and webinars, podcasts — books, articles and blog posts delivered via his Learning Platforms, YouTube or your in-house systems. Live. He can bring his expertise to your teams in live sessions, but these are rare now and need to be exceptional events. Conferences, seminars and events, he can educate, entertain them with my unique speaking style that has been enjoyed by thousands of sale people and advisers across the globe. Forty-five minutes, 2 hours, maybe a day – you choose. You figured there was a better way to develop your sales teams, you are right, and now you may want to make contact with him so you can talk further. You can Linkin with him at www.paularcher.uk, and he’ll start a conversation or head to his YouTube Channel for more at www.paularcher.tv email him at paul@paularcher.com or phone him on +44 7702 341769, and where ever you are in the world he’d love to hear from you. Paul is a prolific writer and blogger – maintaining three blogs, with www.paularcher.com attracting thousands of hits from all over the world. He has published eight books. His latest tome "Pocketbook of Presentation Skills” was released in January 2020 and is available from Amazon. The third edition of his book “Train the Trainer of the 21st Century” is also available from Amazon.