Since the Retail Distribution Review (RDR) all Retail Investment Advisers must obtain a Statement of Professional Standing (SPS). An SPS can only be issued by an FCA appointed accredited body and confirms that an adviser:

Without an SPS you cannot perform your role. It is important to note that an SPS is not confirmation that an adviser is fit and proper to perform their role nor confirmation of the advisers’ competence.

Since March 2017 Relevant Authorised Persons (Banks, Building Societies etc.) have been required under the Certification Regime to issue certificates to all personnel who fall within the definition of significant harm functions which include Retail Investment Advisers. Unlike the SPS it is the responsibility of the firm to issue the certificate. Without a valid certificate, you cannot perform your role.

The SPS could be regarded either as a sub-contracted service as part of the Certification process or an additional safeguard for those individuals who are perceived to pose an even greater threat to causing “significant harm” – but some of the aspects feel like duplication rather than value add.

We therefore have a situation where some Retail Investment Advisers have both a Statement of Professional Standing AND a Certificate where others, who are yet to fall in scope of the Certification Regime only have an SPS.

Looking more closely at the requirements of the Certification Regime the SYSC sourcebook states that Under section 63F of the Act, a firm may issue a certificate to a person only if the firm is satisfied that the person is a fit and proper person to perform the FCA-specified significant-harm function to which the certificate relates.

The Certificate therefore differs from an SPS insofar as it confirms the individual is fit and proper to perform their role, which includes their competence and capability.  Is this not a stronger message?

As it stands, when the proposed regulations are extended across the rest of the financial services industry we will end up with a population of people that fall within the Certification Regime, some of whom will also be required to hold a Statement of Professional Standing. The SPS could be regarded either as a sub-contracted service as part of the Certification process or an additional safeguard for those individuals who are perceived to pose an even greater threat to causing “significant harm“ – but some of the aspects feel like duplication rather than value add.

The SPS is issued by an Accredited Body which must go through a robust process to be given this standard. They are accountable to the FCA in performing their role.

The operation of the Certification process is the prescribed responsibility of a Senior Management Function whose appointment has been approved by the FCA.  It is further proposed in CP17/25 that a new prescribed responsibility is introduced relating to the code of conduct – specifically, to make sure the firm trains its staff in the Conduct Rules and complies with the FCA notification procedures.

The TC sourcebook states that for retail business a firm must review on a regular and frequent basis employees’ competence and take appropriate action to ensure that they remain competent for their role  It is fair to say that firms undertake various activities to ensure CPD is undertaken and evidenced and can embrace an audience wider than Retail Investment Advisers. Firms will be used to this responsibility and could arrange for independent verification of at least 10% of their Certification population. This would be more intensive than the CPD checks undertaken by the Accredited Body if undertaken within the workplace especially with access to other corroborative evidence.

The Code of Conduct regulations contain specific requirements in respect of training and breaches. SYSC also states If, after having considered whether a person is fit and proper to perform an FCA-specified significant-harm function, a firm decides not to issue a certificate to that person, it should consider if the circumstances warrant making a notification to the FCA for a breach of the rules in COCON pursuant to SUP 15.3.11R (Breaches of rules and other requirements in or under the Act or the CCA).

As part of the process to obtain a Statement of Professional Standing an adviser makes a personal declaration that they have complied with APER/COCON. Such a declaration could be made to the SMF in charge of the prescribed responsibility for conduct rules.

The FCA has suggested that advisers might wish to show their Statement of Professional Standing to customers  which begs the question will you show your certificate to potential customers as well and be prepared to answer the question, “Why do you have two certificates?”

The future of the Financial Services Register in relation to people that fall within the Certification Regime suggest that there is a role for Accredited Bodies to help track individuals. There is also a place for them to act as a potential home for complaints about an advisers’ behaviour

Perhaps there should be some discussion and debate as to the role of a Statement of Professional Standing and its role in the future Certificated world? I am not sure that two pieces of paper is the ideal solution to present to a customer – but one crafted by firms and Accredited Bodies working together would be ideal.

I provide consultancy and support to UK based financial services companies helping them to design and implement practices that develop their people, achieve their business goals and comply with the needs of the regulators. I specialise in T&C, competence assessment and conduct which may be of particular interest to companies as they address the requirements of the Certification Regime and Code of Conduct requirements. My specialities include: Knowing you have a business to run Valuing your people as your greatest asset Keeping things simple, practical and relevant Engaging the business to promote ownership Ensuring Compliance is a natural by product of doing things well 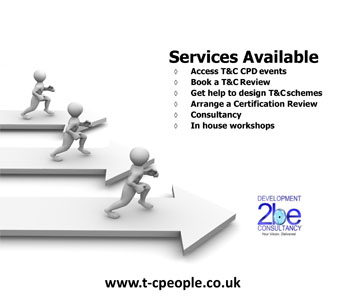